One thing we do differently at 8 Ball compared to the “big” online retailers, is that we have experienced riders who have ridden the tires we sell and can share their opinions. So when the new Dunlop Q4 hit our racks, we pressed founder and CEO Ken Wahlster into service and mounted a set on his 2017 KTM Super Duke GT. He recently headed for Inde Powersports Ranch with the team from Yamaha Champions School. Here is his report:

The new Dunlop Q4 tires are a lot of things, but they are also not a lot of things.  So to start this review, I thought it best to start with what the new Q4s are not… First, they are not a replacement or an upgrade to the Q3+.  The Q4s are a totally new tire and are an addition to the Sportmax lineup, rather than a replacement for the Q3+.  So what is the basic difference?  Two words “track day”.  Now, before all the Q3+ riders go to a dark place and hurl flaming emails exulting the Q3+ and its ability on the track… I am not saying the Q3+ is not a solid tire for track riding, especially if you are concerned with mileage.  In fact, the folks at the Yamaha Champions Riding School had them on all of their rental bikes and the instructor bikes too.  The Q3+ heats up fast, sticks great, works well in the wet and last surprisingly long.  It is a great performance street tire that can definitely hold its own at the track.  This is why the Champions School bikes are fitted with the Q3+.  They are a great tire and provide value with their longevity.  HOWEVER, the Q4 is totally different beast.  If you are an “A” rider at the track, the Q4 is a potential tire for you.  The Pirelli Super Corsa is perhaps the closest comparison track day tire and we can discuss the pros and cons of it versus the Dunlop Q4, but for this article (and for the money / the Q4s come in at about $80 less per set than the Super Corsas) let’s focus on the Q4s. 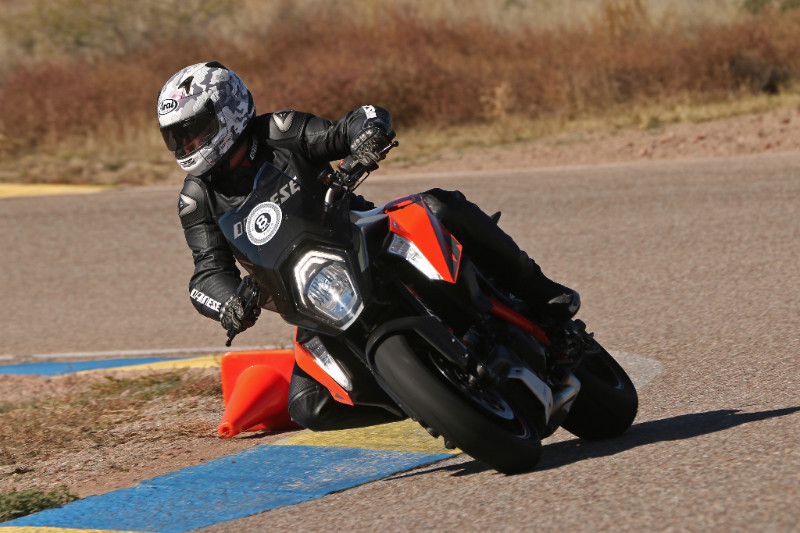 One more “not” before we get into what the new Q4 really is… I am not a professional road racer.  There are plenty of riders out there who would spank me like a red headed step child on a road course.  Case in point, every single one of the Yamaha Champions School’s instructors.  These folks are truly gifted riders and more importantly they are technicians who do an amazing job of explaining both basic concepts and suggesting the smallest changes to make riders of all levels better at the art and science of track riding.  From corner entry to body position, the coaches at Yamaha Champions School are the real deal and if you want to learn how to ride faster on the track (and safer on the street) I can recommend them without reservation. 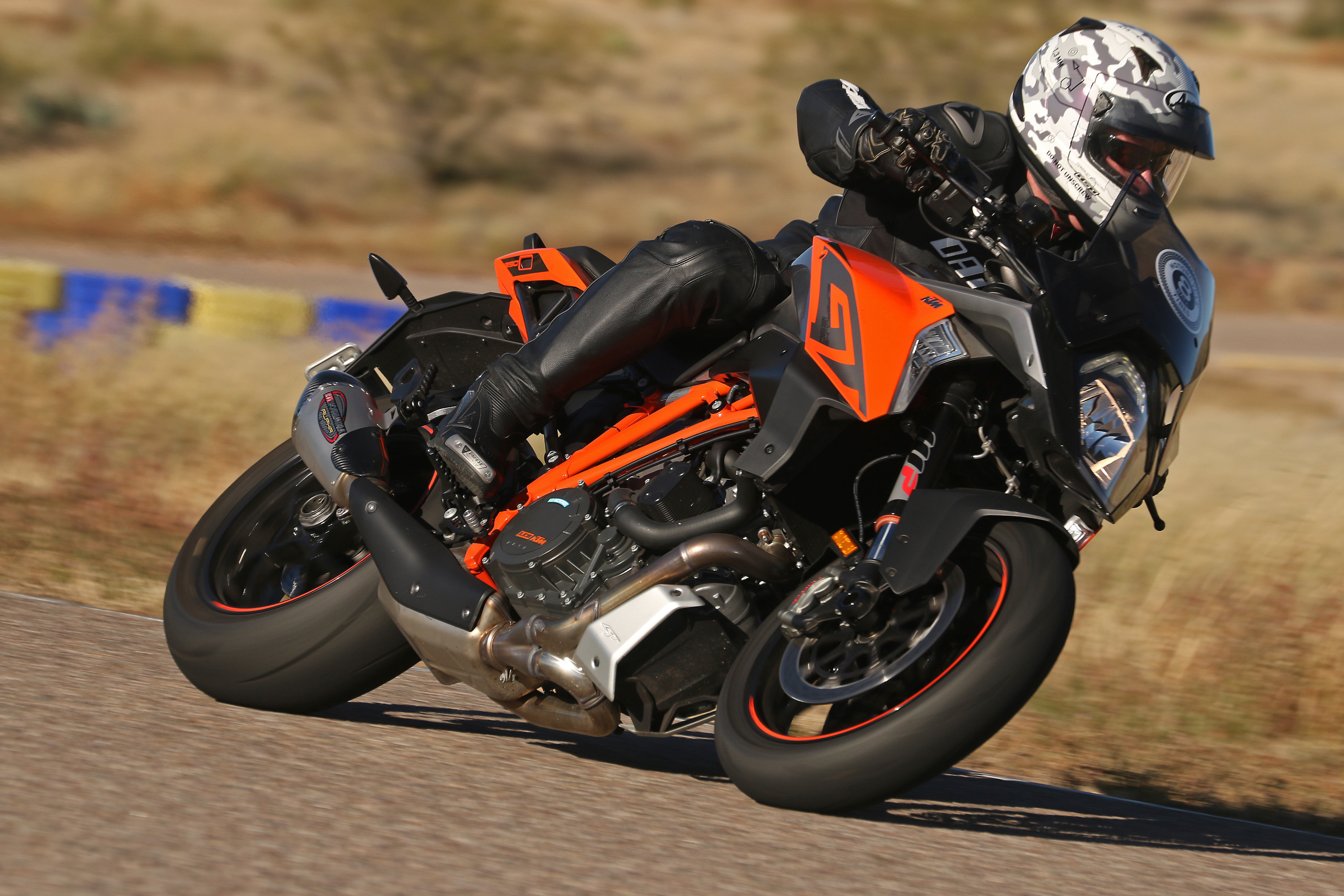 One of the first things most people notice about the Q4 is how aggressive it is (even when sitting still). With fewer grooves than the Q3+ it is clear that the Q4 is made to live on the edge… literally. At the edges, the Q4 is essentially a racing slick.  While the Q4 is a street legal DOT tire, I wouldn’t suggest them for normal street use unless mileage is no concern. If you are lucky enough to work at a motorcycle tire shop like me, you’ll want to run them all the time. As I said above, I am no pro rider… so I take any advantage I can get and the Q4s definitely provide an advantage. 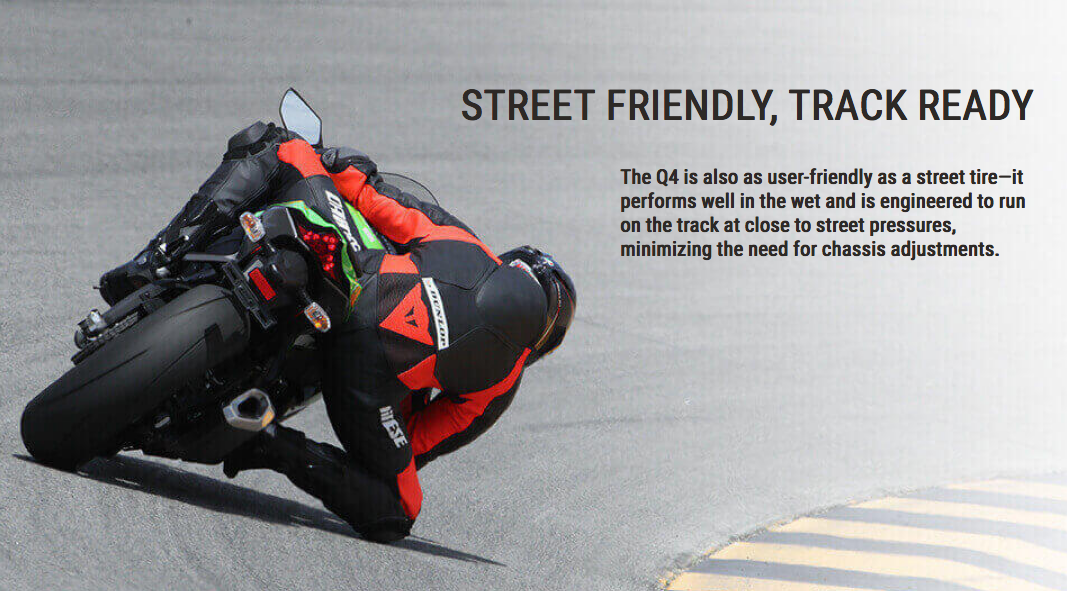 I can’t claim that I pushed the limits of the claimed 62 degree lean angle, but I can say that at my maximum lean angel the Q4 was more stable and predictable than any other tire I have ever ridden. Let’s talk about the “go” side of the equation first. The big 1301cc engine of the KTM Super Duke is putting out 177 hp and 144 NM of torque. It is a beast that can push the limits of any rear motorcycle tire. The Q4 provided excellent grip as expected, but most important to me was the predictability. As I let the big KTM dog run the torque would eventually break the rear wheel loose, but it was predictable and controllable with good throttle control. There are a myriad of explanations for this, but probably the most important is heat management and this is one of the big differences between the Q3+ and the Q4. As stated the Q3+ is a fine tire, but it does not have the same heat management qualities as the Q4. I found the Q3+ was quick to heat up, but like most street oriented tires it also held more heat and therefore could be heated too much and exhibit less stable handling. The Q4 heats up quickly (I found this to be within 1 lap without tire warmers) but it also manages heat better and provides a the rear provides more predictable feel at corner exits and straightaway entries. 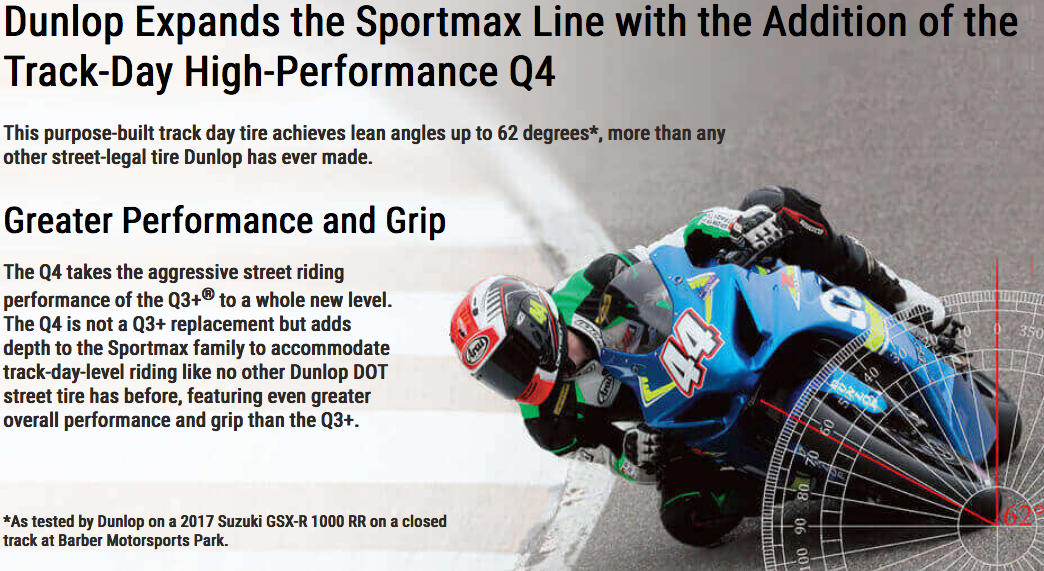 As you can see the 200/55R17 rear Q4 on the KTM 1290 exhibited a nice even wear and did not show any signs of cold or hot tears. Note: I ran these at street pressures of 30 R / 32 F. The Q4 is designed to run at street pressures which also reduces the need for suspension adjustments for the track. 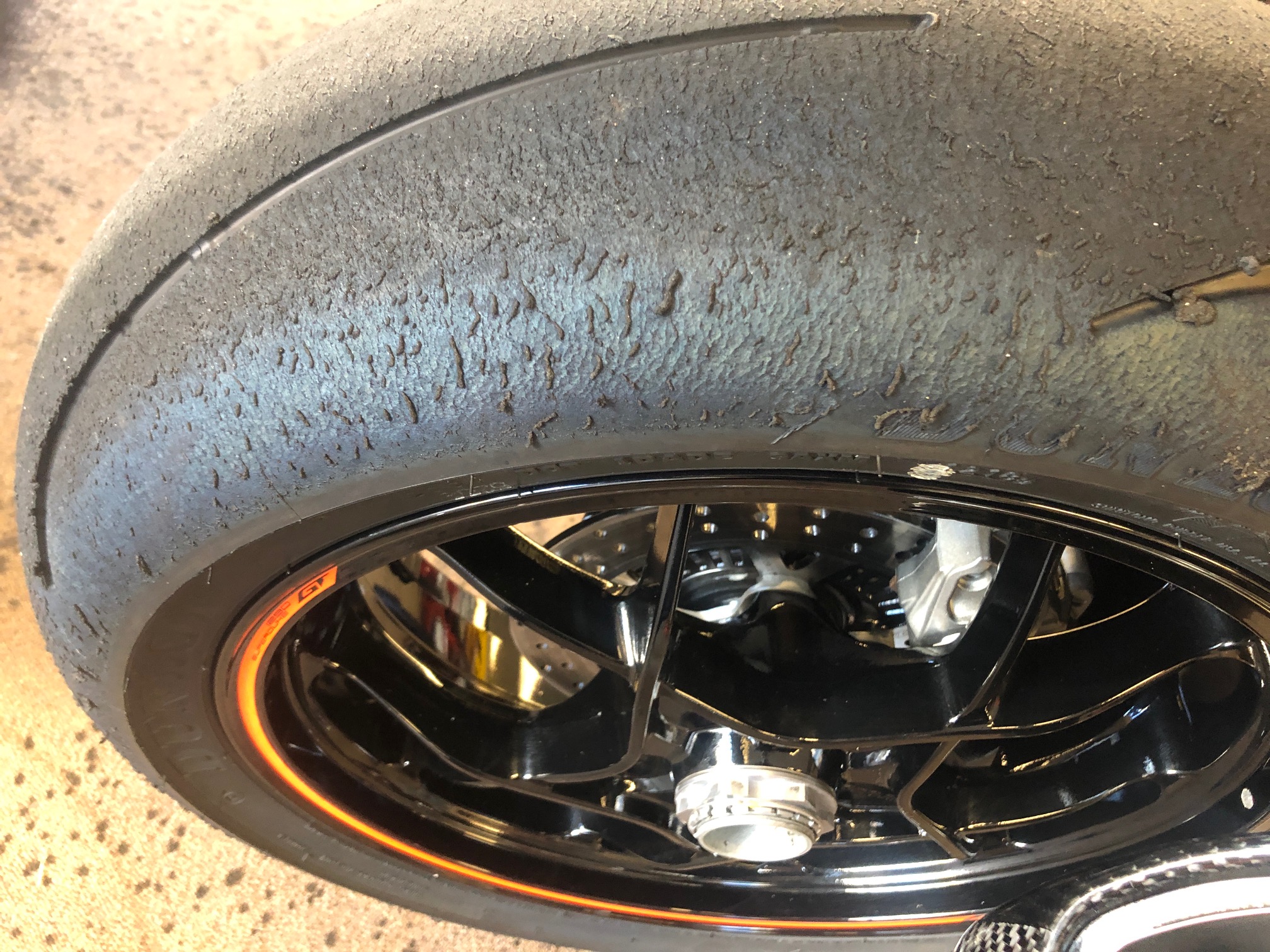 On the brakes the attention switches to the front tire and again the Q4 did not disappoint. Under hard braking, the front tire changes shape considerably, but the Q4 was very stable as the 420 lbs of KTM and 200 lbs of rider compressed the front forks and transitioned nearly their entire collective weight onto the credit card sized front contact patch. Transitioning from the brakes the tire regains its shape and through tip in to max lean angel (at least for me) the front Q4 held the line well and didn’t offer any objections as the throttle rolled on and the weight transferred again to the rear wheel. Even during exaggerated exercises of extreme trail braking and backing the bike into corners both Q4s were stable, predictable and down right fun! In summary, we have a winner on our hands with the Dunlop Q4. If you are looking for track day performance and a price that is $80 less than the competition, you owe it to yourself to try a set of the Dunlop Q4s. 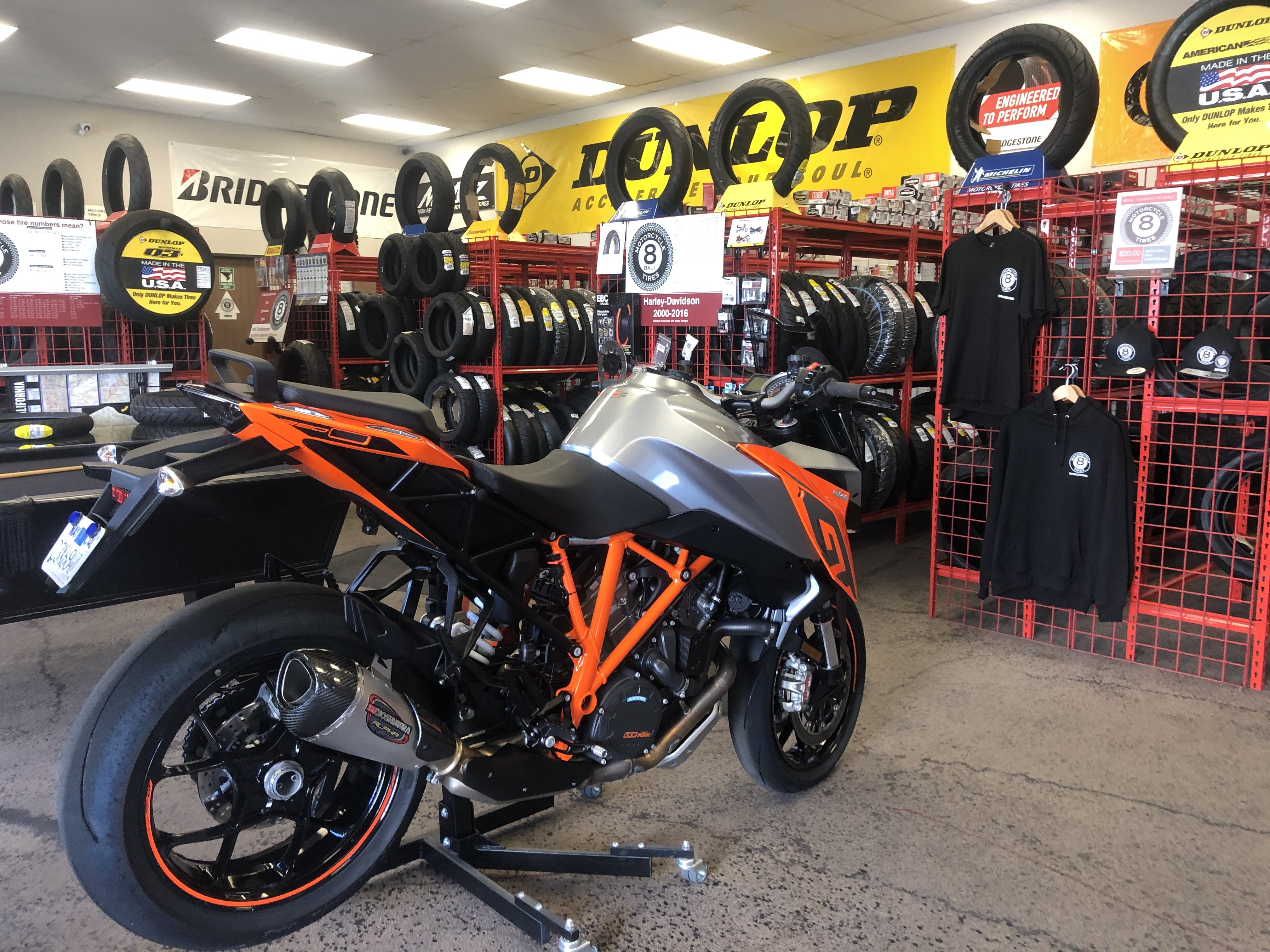 Want to check out the Actual Q4s used in this test. Stop by 8 Ball’s San Diego location and see them up close on the KTM Super Duke GT in our showroom. We keep all the available sizes in stock and look forward to hearing your impressions of the Q4.

One final shout out to the Nick, Chris, Keith and the entire team at the Yamaha Champions Riding School. I truly had a blast and learned a lot riding with the instructors. They made it challenging and fun all while making me a better rider. I plan on going back again. If you think you can’t improve your riding, you have already lost the race… so If you want to get faster on the track or just safer on the street, click on the link below to learn more.